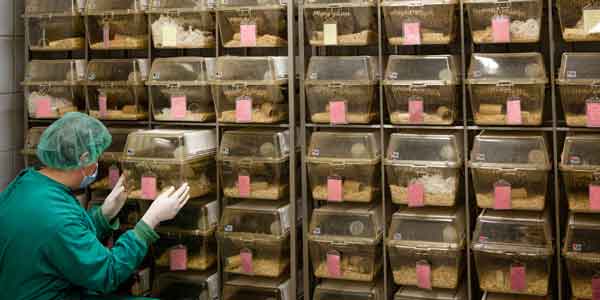 Rats are among the most popular laboratory animals in the U.S. and around the world, despite growing recognition that rodent models fail to predict human responses. They were the first mammalian species domesticated for the purpose of scientific research and have been experimented on since the mid-1840s, beginning in Europe.

With this long history, and assurance from scientists that they have laboratory animals’ best interests in mind, one would think that researchers would have optimized housing conditions for rats by now—but new research suggests otherwise.

A new study recognized that standard-sized rat cages confine rats and prevent them from performing natural behaviors, such as burrowing, climbing and standing upright. Standard-sized rat cages range from 18-20 cm (~7-8 in) in height, yet mature rats are able to extend nearly twice that height when they are standing.

Rats in confined conditions were less active and demonstrated more lateral stretching than those housed in more natural, larger spaces—perhaps to compensate for not being able to stand upright or possibly to correct for stiffness and stress from being restricted in their
cages.

Ultimately, these findings raise concerns that standard housing conditions compromise the welfare of laboratory rats. And, as a result, this has implications for their use as models in the lab and the outcome of the experiments the animals are involved in.

While researchers proposed performing additional experiments into how standard laboratory cages may interfere with rats’ normal behaviors, we’d like to make a different suggestion: stop investing in animal experiments involving rats—and all other animals— altogether.

Not only would research dollars pay much higher dividends in terms of progress in human health if they were used to support more human-relevant research, but redirecting funds in this way would finally put an end to the unnecessary suffering of laboratory animals.

What are your thoughts on this week’s article? Send your questions and comments to sciencecorner@navs.org. We look forward to hearing from you.

Everyone needs a stretch every now and then, but most lab rats don’t get the chance. According to new research, they are simply too confined in standard-sized cages to move naturally, potentially affecting their health and the outcomes of some experiments.

This entry was posted in News and tagged Science First on July 18, 2016.
Comments are closed.